The family of the late Mark Washington Markuviah is currently chasing Ghanaian football star Afriyie Acquah over some monies owed the deceased prior to his death.

According to a letter from the lawyers of the family sighted by MyNewsGh.com, the Black Stars Midfielder is said to have bought a luxurious Hummer vehicle from Mr. Markuviah and only made part payment.

The footballer is said to be owing $49,000 as balance which the family expects to be paid to help them give the deceased a befitting burial.

The letter said Afriyie Acquah has 14-days to settle the debt or face court action.

But grapevine information indicates that the family for some time now has been on the neck of Afriyie Acquah who has refused to pay the money owed hence the need to bring in lawyers.

Information available to MynewsGH suggests that Afriyie Acquah has sent some insulting audios to the son of the man in question who did not only sell his Hummer to him but also bought his house.

Mark Washington Markuviah according to sources have sold houses and cars to most Ghanaian International footballers in the past with most of them paying back their debt after the man passed on. 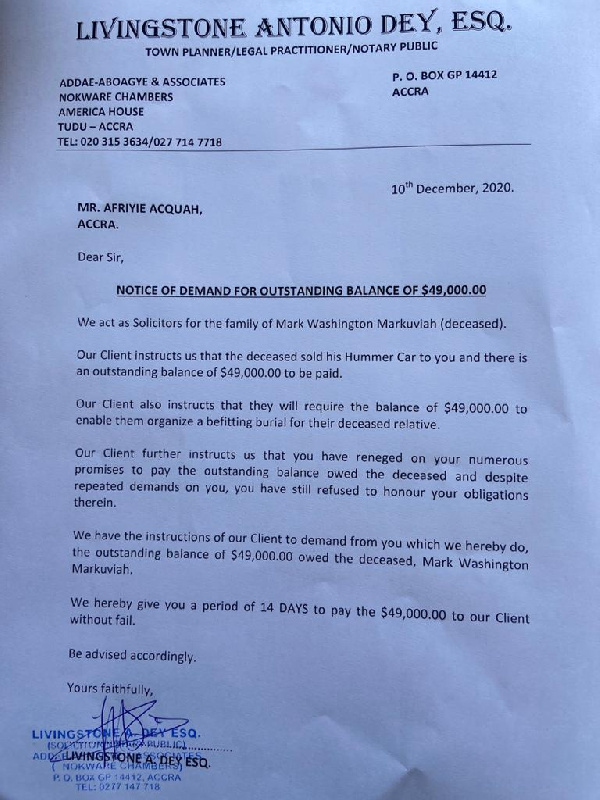 Energy got me everything.
Previous Display your stolen cash too – Abronye dares Akufo-Addo appointee
Next A Plus recounts how some NPP bigwigs incited him to publicly attack Bryan Acheampong