Otumfuo’s Mpaboahene, 7 others cited for contempt of court over unlawful demolition

The Mpaboahene of Otumfuo Osei Tutu II Nana Yaw Owusu, the presiding judge at Asokwa Magistrate Court in Kumasi, His Lordship Korkor Owusu Achaw, Ashanti Regional Police Commander, COP Kwasi Mensah Duku and 5 others have been cited for contempt of court over a disputed land case before a Court of Appeal in Kumasi.

A copy of the writ sighted by MyNewsGh.com alleged Respondents are acting together or individually to undermine the efficacy, value and potency of the judiciary system by facilitating working on undertaking, fast-tracking and demolition of H/No K75, Krobo, Kumasi while an application for “Stay of Execution” which is pending before Court of Appeal.

According to the plaintiffs, the conduct of the defendants is an egregious abuse and aberration of the legal system which has seriously rendered the entire application for the Stay of Execution now irrelevant and nugatory; with the unwarranted demolition of the said building.

According to the lawyers of the plaintiffs, the suit has been demolished by the conduct of the Respondents acting on the flagrant abuse of the judicial process.

The following persons were added to the list for their alleged roles played leading to demolition of a building H/no K.O. 75 at Manhyia in the Ashanti Regional capital, Kumasi. 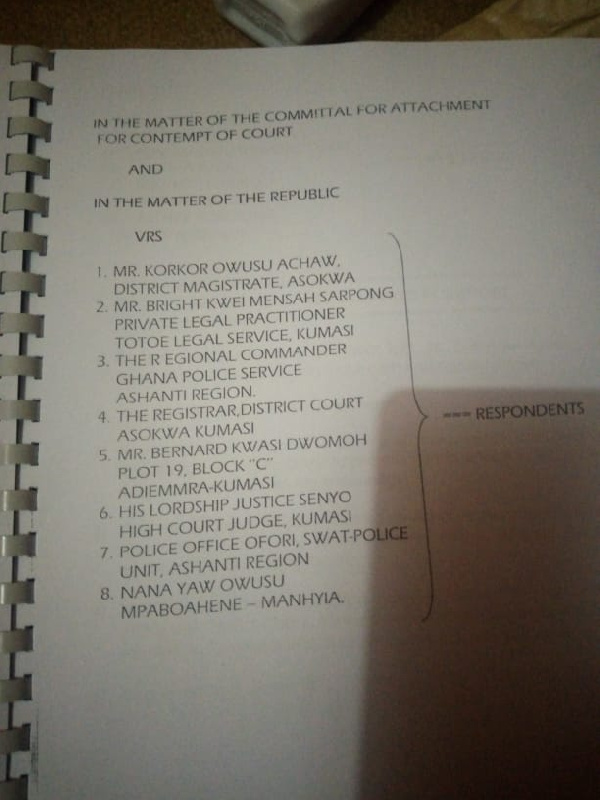 Energy got me everything.
Previous Akufo-Addo to deliver final State of the Nation Address on January 5
Next NDC builds markets, we don’t burn markets – Ofosu Ampofo