Private legal practitioner, Prof Kwaku Asare, aka Kwaku Azar, has given some insights into the key timelines of the petition filed at the Supreme Court by John Dramani Mahama to challenge the results declared for the presidential elections on December 7, 2020.

Pre-trial hearing of the petition is most likely to start on January 9, 2020 with actual hearing starting on January 15.

Final judgement is likely to be given on February 10, 2020, which is after 42 days in total, according to Prof Asare.

As part of a new set of rules, the Supreme Court announced in November 2020 that any electoral dispute that will arise from the December 7, 2020 presidential election will be determined within 42 days.

Also, only the declared winner of the presidential poll and the Electoral Commission can be respondents to a presidential election petition.

The following are Mr Mahama’s salient arguments in his petition filed on Wednesday, December 30, 2020:

– Electoral Commission violated Article 63(3), 23 and 296. This is a shorthand of saying the EC acted capriciously and unreasonably in declaring the 2nd Respondent (Nana Addo Dankwa Akufo-Addo) President-elect when Nana did not get 50% + 1.

– The declaration of the President-elect is void.

– An order annulling CI 135. This is the instrument declaring Nana as President-elect.

– An injunction restraining Nana from holding himself out as President-elect.

– A runoff between petitioner and 2nd Respondent. 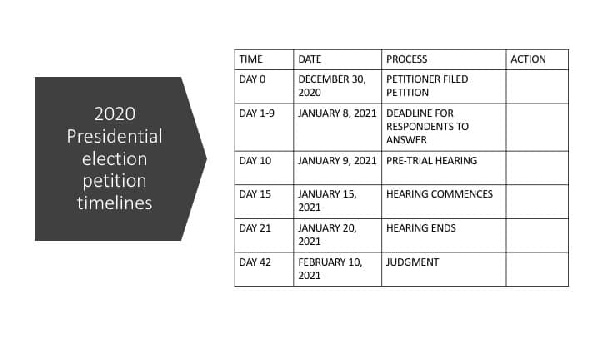 Energy got me everything.
Previous Gabby Otchere Darko taunts NDC after identifying error in petition
Next Election 2020: Ghana will make history for overturning a stolen verdict – Apaak